The Akrep Crawler Robot it’s an “state of the art” project designed to test some design and constructions abilities on a fun context.

The robot was designed on a simple crawler base, made by a rubber band over wood wheels, this to simplify the control to just 2 DC motors that ensure the movement over most surfaces. The telepresence module offers the ability to control the machine and explore the field remotely via Wi-Fi using a video streaming and a SSH protocol comunication tunel to emulate local commands and control the arduino board through the serial port.

It must be evident to the reader that this kind of system its really oversized and unnecesary on most cases but following the next rules it was found to be a really easy way to work.

Design:
The main shape of the robot was given by the use of the laptop inside the structure, the size of the body must match and correctly keep the proportion of the crawler system. The shaft for the multiple wheels was designed to pass through the whole body to ensure the centricity and perpendicularity of the axis and the stability of the band. The telepresence module was design to hold an old web-cam connected via USB to the laptop 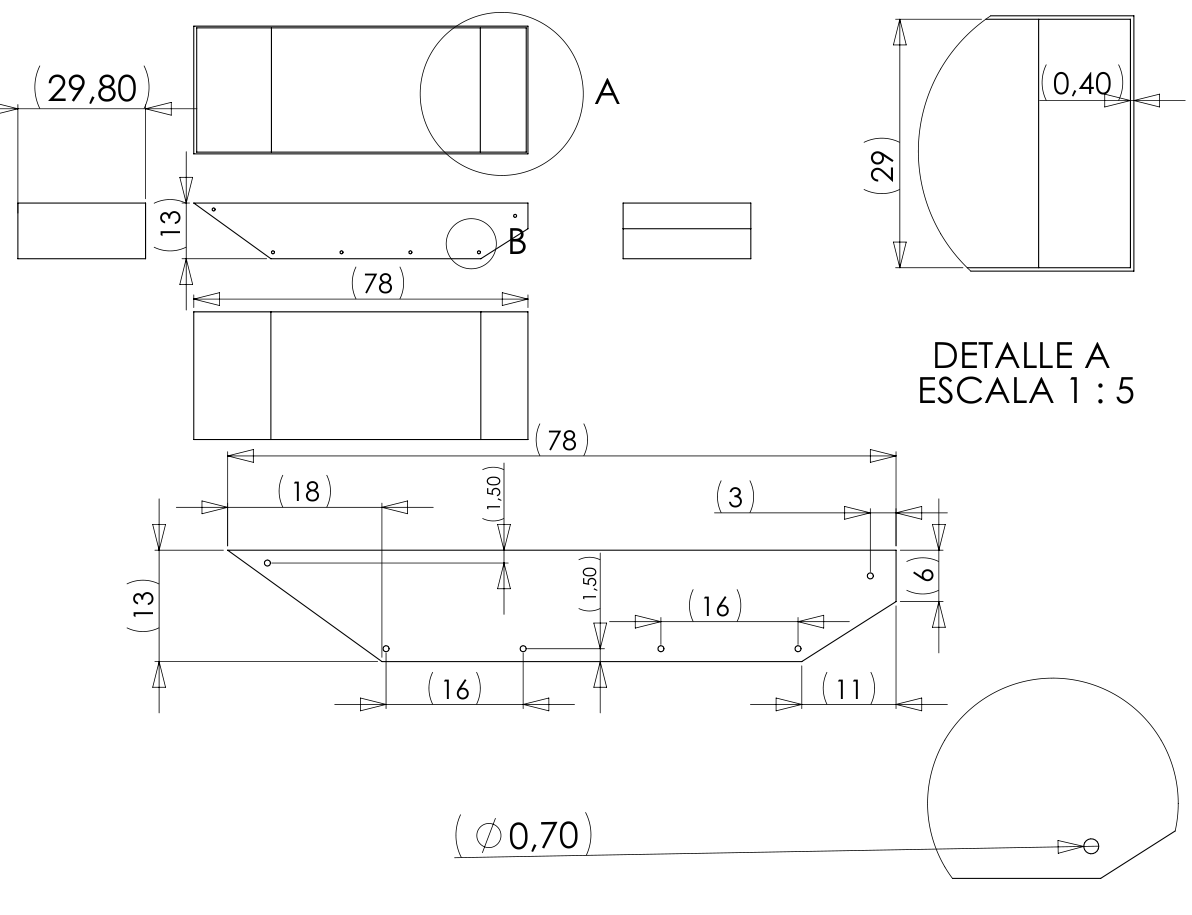 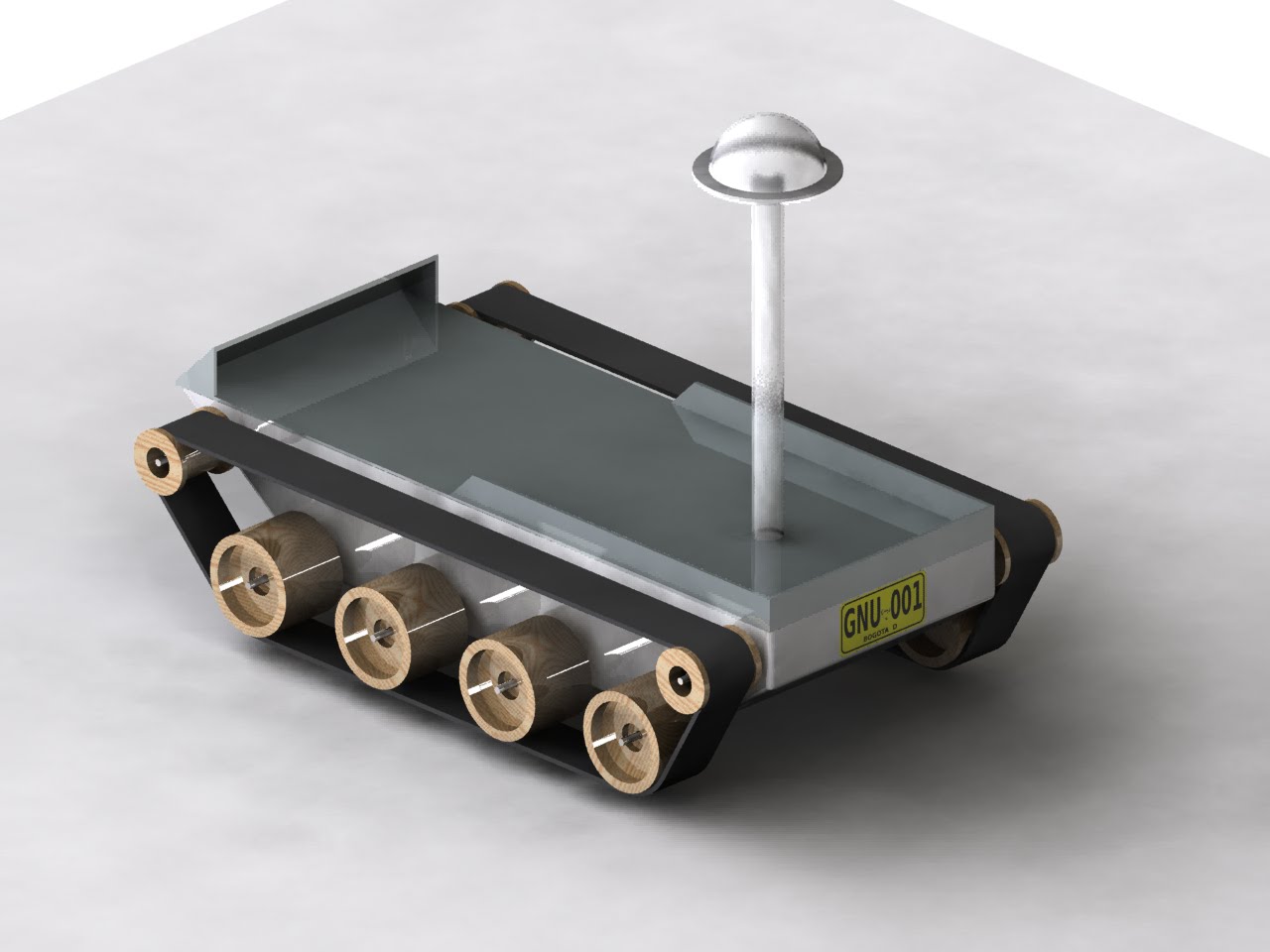 Construction:
The use of most acrylic and wood parts to build the assembly allowed to facilitate the construction of the structure, even so, this materials may be no ideal for arduous work of the machine and in others aspects more than just appearence it must be carefull selected and worked. Again , searching the easiest and fastest way to comple the assembly process the plywood internal struture plus a foam grid allow to support the laptop and enssure a correctly ventilation, removal and damping.

The telepresence structure its made by a acrylic narrow tube fixed on the base to the body and a tiny gearmotor controling its rotation, on its top an acrylic translucid dome hold the web-cam with its own built-in microphone, the USB cable its hold by the vertical tube and comes out to the laptop under the robot cover. Some work was made to the dome to ensure the focus clarity and the sound capture of the inside device. 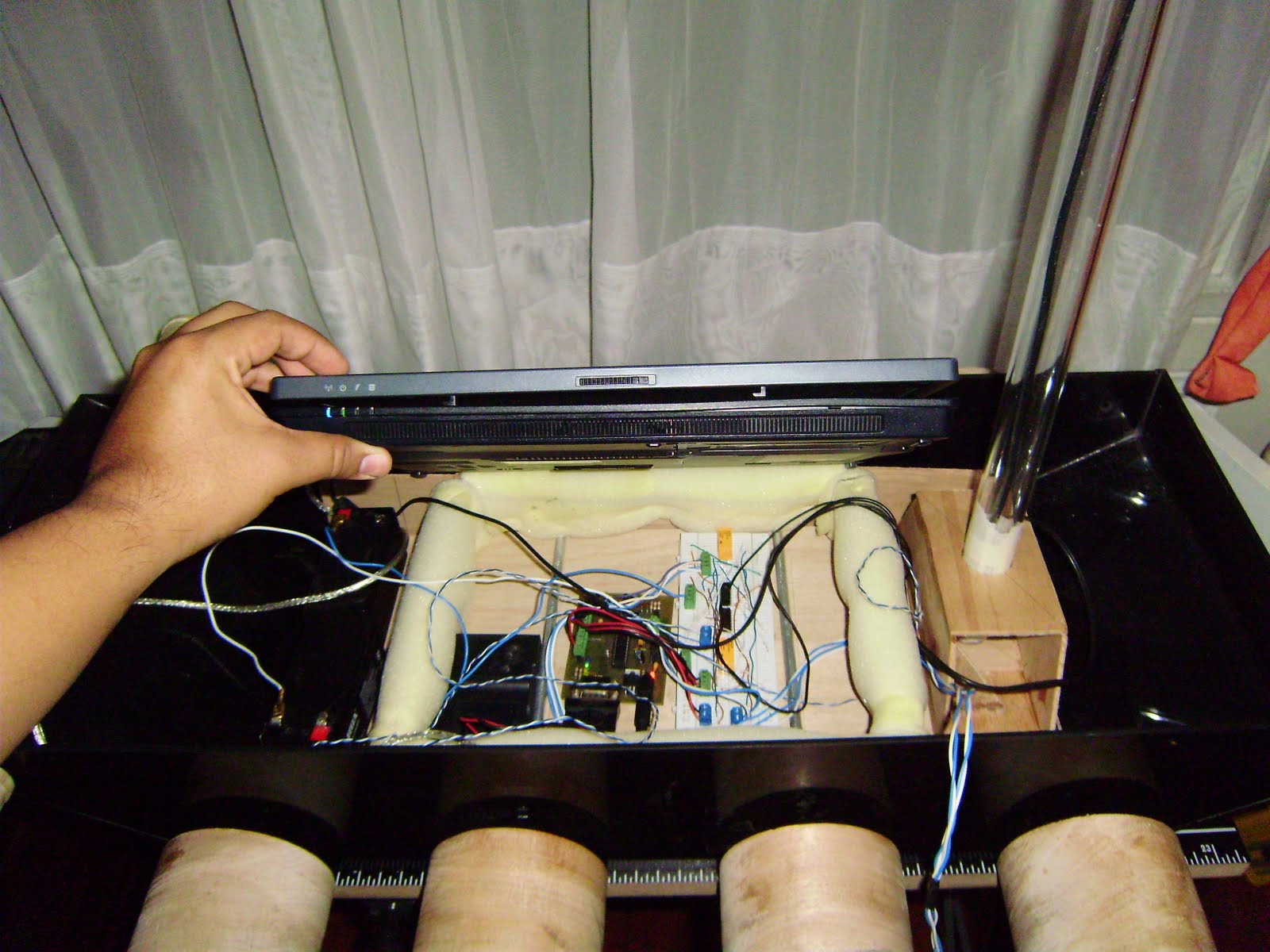 Control: The easiest and cheapest way to control the robot was via Wi-Fi, using an old laptop as an slave and controlling it through an SSH tunel comunication protocol to emulate local commands that comunicate with the Arduino board using the serial port. 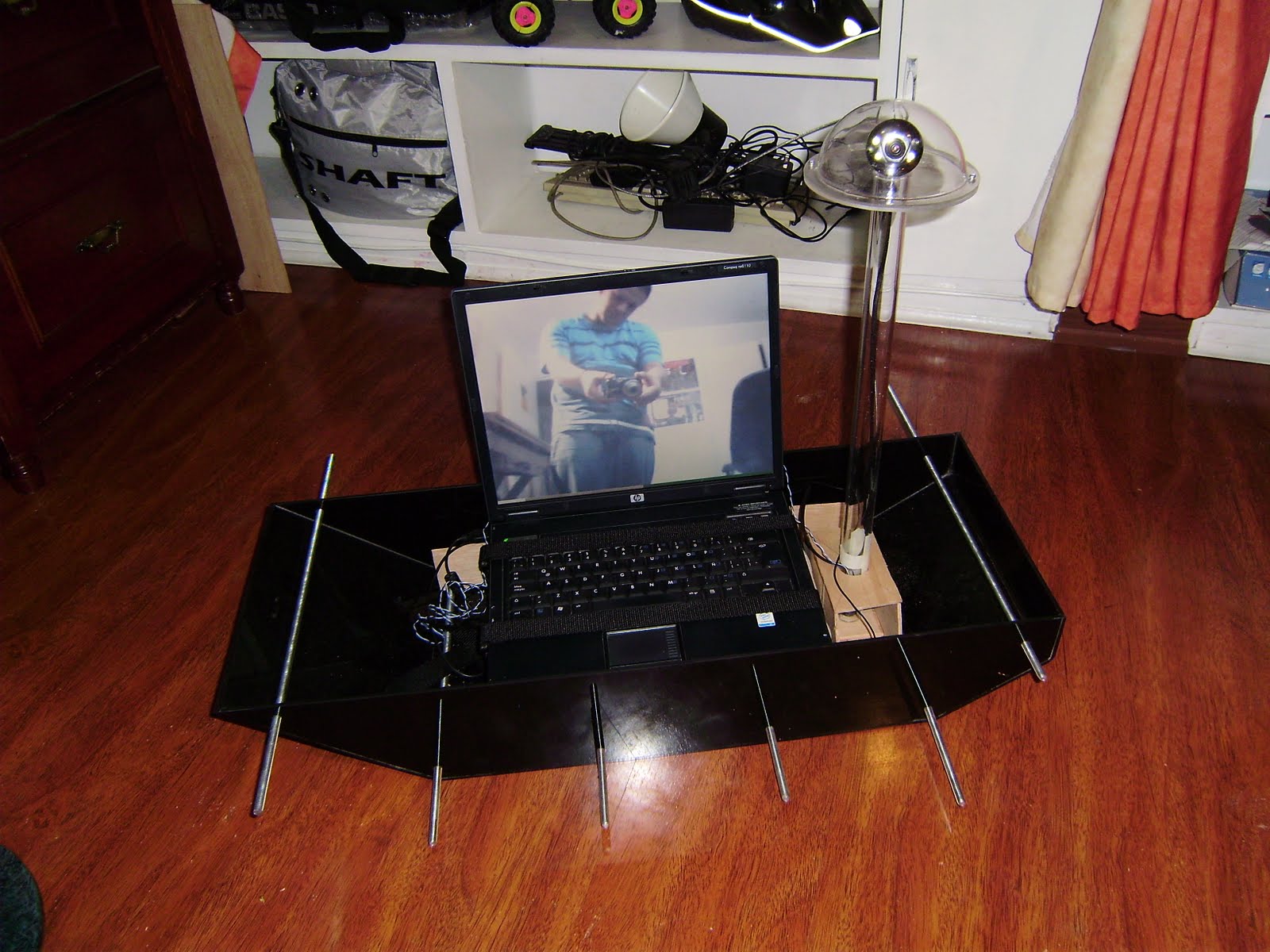 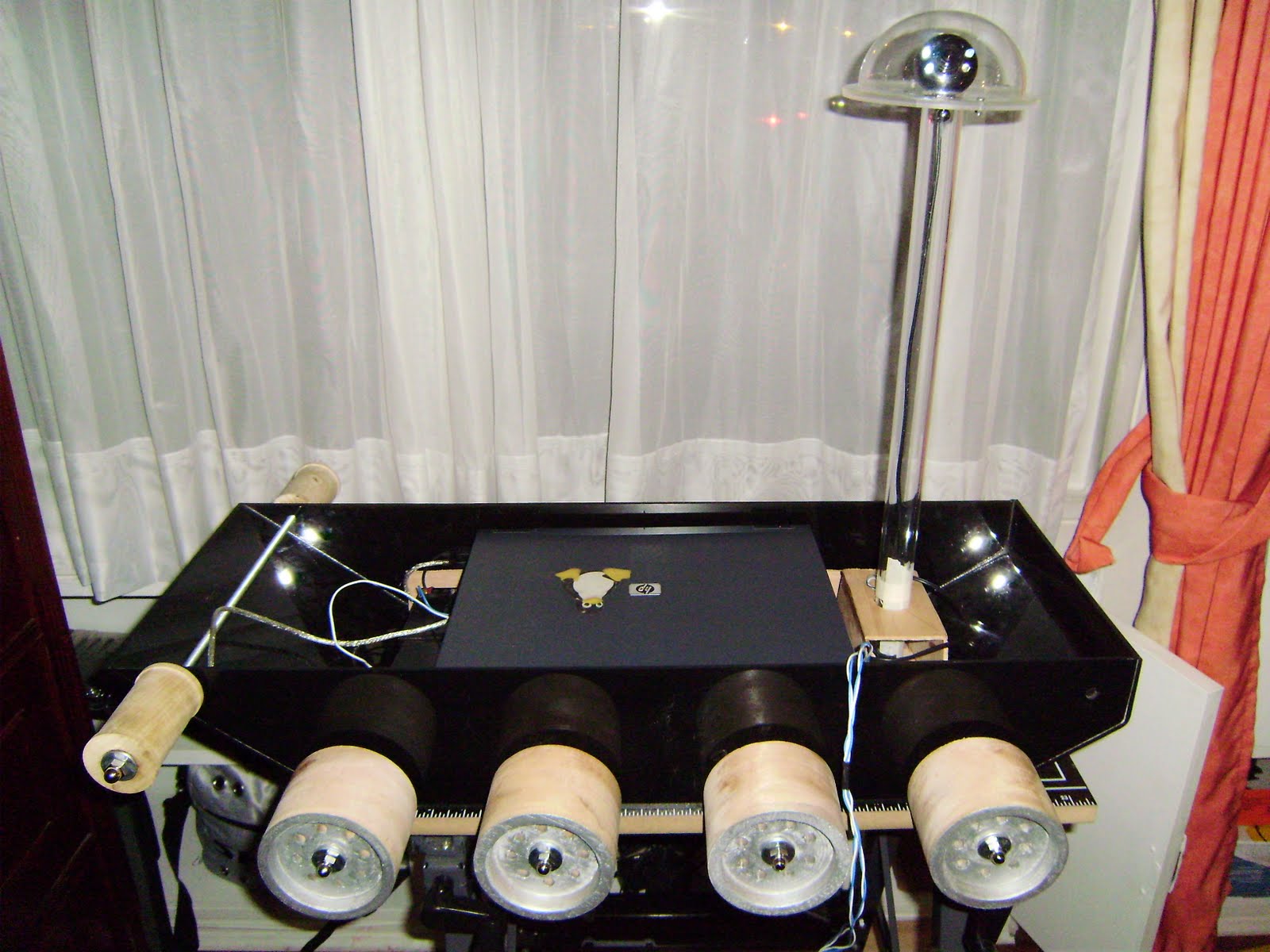 The control is done by a two axis gamepad on a distant laptop or desktop computer where the streaming video can be seen and a really simple program reads the input gamepad signals and transmit them via SSH. The robot its powered by two 12 V batteries wich allow it to function by several minutes, actually more than the old laptop’s battery permits, the system can even carry its own long distance router to follow the robot with another laptop everywere.

Almost all material used on the robot were successfully reused or recycled on other projects which make this construction very profitable.

The project was presented on the commonly known thecnology event Campus-Party event in Bogota Colombia with great reception.